Boston Terrier is result of a cross between a White English Terrier and an English Bulldog. This is a tiny dog breed that is strong and powerful. His kind demeanour makes him an excellent family pet and friend.

Boston Terriers are incredibly lovable, bright, energetic, and affectionate dogs. With their antics, they adore children and people of all ages.

This breed is people-oriented and prefers to be with you at all times. You’ll have an adoring and loyal best buddy dog if you can offer it enough of attention and exercise. 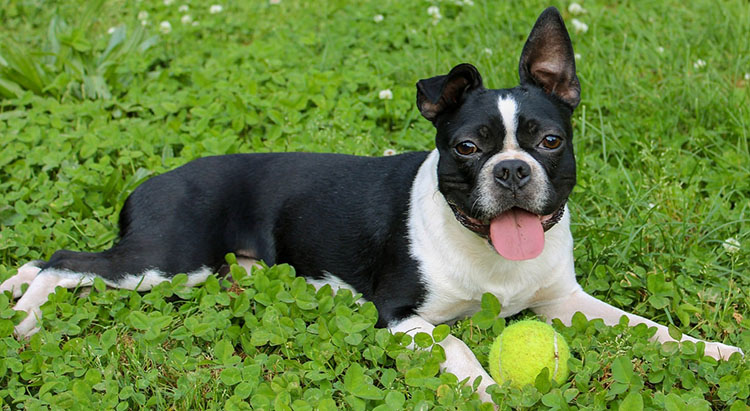 The Boston terrier breed began in 1875, when Boston’s Robert C. Hooper purchased a dog named Judge from Edward Burnett, afterwards known as Hooper’s Judge, which was of a bull and terrier type heritage. In the United States, it was the first non-sporting dog breed.

It’s one of only a few breeds that can claim to have originated in America. The Boston Terrier is a cross between a White English Terrier and an English Bulldog. The original bull and terrier breeds of the 19th and early 20th centuries are directly related to this dog breed (Hooper’s Judge).

Judge was roughly 15 kilogrammes in weight. Judge is a descendant of Burnett’s Gyp. Mr. Edward Burnett of Southboro, MA, owned Gyp, a white bulldog-type female. She was about 20 pounds, stocky and robust, and had the classic blocky skull seen in Bostons nowadays.

From this foundation, future breeders improved the breed into the form we know today. In 1870, the breed was first presented in Boston. By 1889, the breed had grown in popularity in Boston to the point that the American Bull Terrier Club was created.

The club changed its name to the Boston Terrier Club after James Watson’s suggestion, and it was approved to membership in the American Kennel Club in 1893, making it the first US breed to be recognised.

The Boston Terrier is a playful, intelligent, and lovable dog. They make excellent companions and family pets. They like kids and entertain people of all ages with their antics and distinct, charming expression.

It is a very loyal creature who enjoys company. Boxwoods are particularly well-suited to senior citizens and apartment dwellers. It is one of the greatest tiny guard dogs available. They should not bark excessively.

It has a powerful, upbeat, and friendly demeanour, as well as a good sense of humor. The Boston Terrier is known for its fierce guarding of its owners, as well as territorial tendencies toward other pets and outsiders.

They are usually silent and only bark when absolutely necessary. They enjoy being around people and get along well with youngsters, the elderly, other dogs, and non-canine pets if they have been properly socialized.

Is Boston Terrier Good With you & your family?

Boston Terriers are a fun-loving breed. He’s a terrific family pet and friend because of their affectionate temperament.

The Boston Bulls love kids and entertain people of all ages with their antics and distinct, charming expressions.

They are especially ideal companions for the aged people and those who live in apartments. When it sees people or dogs, it may bark to inform you. 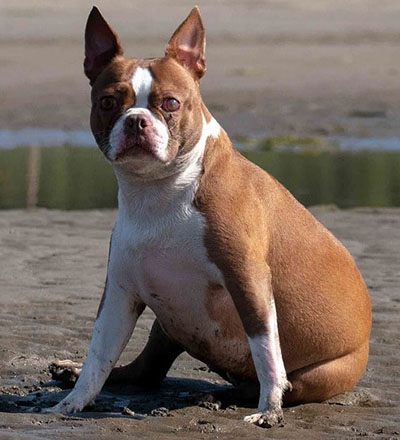 Head: It has large head.

Chest: It has broad chests

Face: They have a broad, flat-nosed face without wrinkles

Nose: It has short nose. Due to short nose it is often snort, drool, and snore

Eyes: Their eyes are wide and round, and they can sparkle with kindness, curiosity, or mischief.

Teeth: They have scissors bite.

Ears: Ears are situated far apart. In use, carried erect or semi-erect, and sensitive. The ears are medium in size and texture.

Neck: The neck of a Boston Terrier is a bit large, and it houses a lot of muscles.

Expression: They usually have a keen, attentive, gentle, and intelligent expression.

Tail: There tail is naturally small. They have very short tails at birth, or the tail is completely missing. It’s shape is vary from bobbed to curled, crooked, straight or gay.

Coat: The American Gentlemen has a smooth, fine coat.

Muzzle: They have a flat muzzle, however some point slightly upwards.

Feet: There feet should be small and compact.

Border Collies front leg should be straight and muscular with straight elbows.

Border Collies back legs should be strong and well muscled.

Which is the Common Health & Problems in Boston Terrier?

The Boston Bull Terrier may be suffer from the this health issues.

How to take care

How much should you feed Boxwood?

The American Gentlemen is a small breed of dog. Select a well-known dog food brand. Puppy food should contain antioxidants to assist their developing immune system and help them survive during their first year of life.

Make sure your puppy is getting the right amount of food. Don’t give them anything more to eat. Boston Bull need food according to their weight.

Here is the table which suggests how much food they require.

How much Exercise does Boston Terrier Needs? 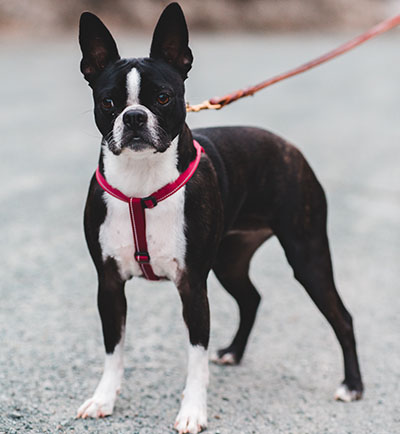 The Boston Bull requires about 60 minutes of daily activity. They require a daily walk of 30 minutes. Include games like fetch, tug of war, and puzzle games at this time.

Exercise will also assist him in maintaining a healthy weight. While walks should continue to be a significant part of a senior Boston’s life, they should be shorter and more leisurely.

You don’t want your dog to acquire aching joints. Swimming is another option for fitness because it might be good for your dog’s joints.

How to train Boxwood Puppy?

For your American Gentlemen, choose a small puppy crate with ventilation on all four sides. They need enough space to sit, stand, and turn around. Instead of being viewed as a punishment, going inside the crate should be viewed as a treat.

Keep the container somewhere in your house where you spend a lot of time. In this manner, your pup can sometimes go in her crate while still feeling like a member of the family. Within the crate, keep a water dish and food.

Deliver toys to them. Make sure that the toys won’t get stuck in their throats and cause them harm. After you’ve gone out or taken a break, put your dog in his crate. You’ll keep an eye on him and take him outside when the weather permits.

The Boston Bull is polite to all people and peaceful around all pets. Socialization can help your dog become a dependable, charming, and adventurous adult. You may take your Boston Terrier to a variety of places.

By motivating them with clarity and quality, socialisation is the best way to train them. Teach them basic commands like “return”, “seat”, “remain”, “heel”, and “down.”

Start with simple commands when training your dog. Begin teaching your dog the commands “lie down,” “sit,” “stay,” “down” or “heel,” and “coming.”

To begin, learn simple commands. After your dog has learned one command, teach them another. When your Boston Terrier puppy responds well, it’s time to reward him.

Potty training is really important. You may also be able to take Boston Terrier puppies who are determined to go potty on a regular basis. Allow them to use the bathroom after eating, drinking, napping, or playing.

Boston Terriers aren’t big barkers and rarely bark. These dogs don’t seem to have an issue with barking. When they are watching a stranger, they may yell out. Barking is a potentially harmful behaviour.

If your Boston Terrier puppy barks at anything unfamiliar, don’t respond right away. Allow them to understand that they are not being rewarded for barking. You’ll be able to move on to them once they’ve calmed down.

How to care Boston Terrier in Winter? 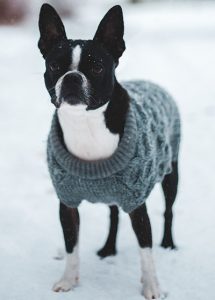 Sweaters, jackets, and coats were worn to protect them from the cold during the winter months. A Boston Terrier should not be exposed to temperatures below 45 degrees Fahrenheit.

Keep your Boxwood inside, even if the weather isn’t too cold. Don’t allow  your dog to run outside when the temperature falls below this level.

Frostbite and hypothermia are possible side effects. If you find any ichness on their body, take them to the vet right away. Your veterinarian has prescribed dog winter cream for you.

Got some questions? Or some suggestions? That’s why we’ve got a review section on this website! You can feel free to leave a review or two down below and we’ll get back to you as soon as possible!

We love reading your messages……